It might be every chocoholic’s ‘dream come true’ story; becoming a chocolate blogger. – and why not start today? As a chocolate blogger myself I’m about to introduce to you, two of the world’s best known ladies in blogging about chocolate. For as far as I know, there are many specialized female bloggers writing about that one brown candy no adult can’t resist. Think about bloggers like; Hazel Lee, Barbie van Horn, Estelle Tracy and Sharon Terenzi. – let’s not forget about male bloggers like; Dom Ramsey.  There’s even a whole list of 50 chocolate blogs: and guess what; that’s not everything. Even Instagram is filled with upcoming cacao bloggers. So if I could give some advice: learn from the best and get yourself into some fieldwork.

Today we’ve got two special guests online at Captain of Goods, so here’s a introduction: 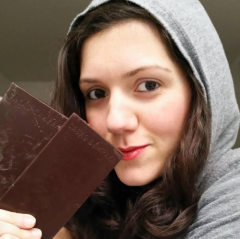 Sharon Terenzi ( 26 ), lives in Prato ( Italy ). She writes very interesting items at her blog ‘The Chocolate Journalist’. As a member of FCIA ( Fine Chocolate Industry Association ) she knows a lot about taste, origin, packaging and other background information. Sharon’s Instagram account got over 10,5K followers but that’s never has been the reason for starting her blog. She’s just a girl in love with chocolate! – and we can’t blame her for this!

This were her latest five items:

If you want to keep up with the latest news in chocolate world you should really visit her blog! 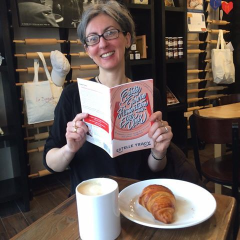 Estelle Tracy ( 37 ), lives in Chester County ( Pennsylvania / US ). Estelle used to start with the French blog: ‘le hamburger et le croissant’, today she’s still going strong but also as a chocolate blogger- and vlogger. This means she also creates video’s about those delicious chocolate bars. In her items she writes about important things like: ‘What is bean-to-bar chocolate’ and lot’s of other things that might really amaze you.  She’s even known for her interviews with chocolatiers. One of these interviews, with Christopher Curtin from Éclat Chocolate even made it to the new magazine ‘Crave‘. At her blog ’37 Chocolates’ you can find many more great interviews. – and don’t forget about het book: ‘Guide de Survie Alimentaire aux Etats Unis’.

One of the many vlogs from 37 Chocolates

Sharon || I started The Chocolate Journalist in 2015 on January 17th, the day of my birthday. Before that I never even thought of blogging. I have always liked writing though, and written essays were my favorite assignments in high-school. ||

Estelle || Yes. 12 years ago, I started one of the very first French food blogs, “Le hamburger et le croissant”, where I shared my favorite American recipes and explained US ingredients to French expats. Because American ingredients are very different from their French counterparts, a lot of expats have difficulty adapting their recipes to their new kitchens. Thankfully, I have done a lot of research on baking and dairy products in the US, so I have been able to help. My early posts about American ingredients laid the foundation for my book, “Guide de survie alimentaire aux Etats-Unis”, a food survival guide for French expats in the US. ||

What was the day or moment this idea of starting a blog about chocolate came into your mind?

Sharon || It was during a long night on April, 2014 alone in my apartment in New York City. One of those nights when you start pondering hard about your future. I was frustrated with my previous job and didn’t really know what to do next. During those night hours I explored many careers in my mind: teacher, interpreter, writer, researcher, sociologist. I realized that all I wanted was to be my own boss, deal with something I would be enthusiastic about every day of my life and have the freedom to work online from everywhere in the World. Starting a blog about chocolate seemed the right choice. ||

Estelle || I decided to launch the blog “37 Chocolates” right at the end of the challenge, when I realized my videos had reached an audience made of chocolate connoisseurs. Sure, I was flattered, but I wanted to reach people who did not know about chocolate, instead of preaching to the choir.  Nine months after launching the blog, I am happy to report the blog is reaching the audience I have wanted to serve all along. I think it’s easier to convince people to read a blog post that make them sit through a 5-minute video. ||

You are a well known chocolate blogger next to bloggers as Hazel Lee and Estelle Tracy // Sharon Terenzi, how do you feel about this and did you already met them in real life?

Sharon || I count the number of followers just to see how many people are learning more about chocolate and are drifting away from shallow corporations while directing their money towards craft makers. I briefly met Estelle at the Fine Chocolate Industry Association event in NYC last June, while I spent a lovely time with Hazel in London for the Speciality Chocolate Fair the first week of September. We can all learn from each other. ||

Estelle || Ha! I take it as a compliment. I met Sharon for the first time last June at an industry conference in New York. Sadly, we did not have much time to get to know each other because I was too busy talking with Glenn from Glennmade Chocolate. I have not met Hazel yet, but I am confident our paths will cross: the world of chocolate is very small! That said, I learned early on to not fall in the comparison trap. We all have different voices and it’s important that every one of them is heard. I do not spend time thinking about my perceived popularity or a number of followers on an Instagram page. Popularity comes and goes, it does not belong to us. What matters is voicing our message. ||

You give people a lot of good advice about chocolate, which means you know everything about great cacao, but what were the chocolate brands you’d liked as a little child? – before you became this wise.

Sharon || I liked the usual industrial chocolate. Kinder and Ferrero are the most popular chocolate brands for kids in Italy, and I was addicted as well. My grandmother always kept Kinder Maxi bars in her cupboard. Too much of an easy target for nephews with big sweet teeth. ||

I know it is a difficult question with so many great cacao; what are todays favourites?

Estelle || I love the citrus notes of Madagascar cacao, which was my gateway to the world of single origin dark chocolate. It’s a bean that makes for joyful chocolate, which is perfect for the holidays. I also enjoy the bubbly, tart notes of chocolate made with some beans from Tanzania. It’s an extraverted chocolate that I relate with. ||

Why did you started a YouTube vlog and isn’t it a weird and maybe scary idea so many people are watching it?

Estelle || I did it for a number of reasons. First, at the time, I did not have the energy to start another blog. The idea of taking photos of each wrapper and bar, transferring them to the computer, and writing lengthy reviews about each chocolate tired me out. Also, I believe that a video review is more efficient than a written one: if you want to talk about a wrapper, all you have to do is show the front and back and you’re done. But the main reason I went for the video format is that I kept reading that video was the next big thing in content marketing: Google pushes YouTube results on page 1 of any search and Facebook launched Facebook Live a few months ago. Video is a powerful medium, but one I was uncomfortable with up until last year. At the beginning, it was scary and difficult to record myself: I was self-conscious about my French accent, I had to learn to tame the flow on my thoughts, and I had to rehearse for days before I was ready to shoot. But practice makes it perfect and, soon, I was more concerned about meeting my personal deadline than on how I may I have been perceived. ||

Like many real chocolate addicts you’ve got a ‘chocolate folder / map’ for the ‘rainy days’, when did you start this and why?

Sharon || I started collecting chocolate bars in December 2014. The packages were too pretty to be thrown away and I wanted to keep track of the brands and flavors I tried. These folders are now my best resource for finding out the latest trends in the industry in terms of packaging and flavors. ||

How do you stay in shape that well with so many chocolate around you?

Sharon || I mostly eat a plant based diet and work out 3 times a week. When it comes to chocolate, I always opt for dark and it’s no more than 2-3 squares a day. ||

Estelle || Ha! I do not eat a lot of chocolate in one sitting and, well, I wear a lot of skirts ||

You wrote about some amazing chocolate brands, which one was difficult to write about?

Estelle || The hardest videos to produce were the last four, because of my personal connection with the makers, namely, Chocolate Alchemist and Map Chocolate .  I had met Robert Campbell of Chocolate Alchemist in Philadelphia before shooting the review last October and his approach really stands out from other makers’. Robert sees chocolate as a vehicle for nutrition and energy, so he never uses white sugar. He purposefully uses an astringent cacao to make his Cultivagro bar. I understood his philosophy and wanted to do it justice, so I did many takes of that video many until I was satisfied. The Map Chocolate review was another difficult one to record. The bars had touched me to the core and I wanted the viewers to feel that. In addition, because it was my very last review of the challenge, I wanted to end on a high note. It got very emotional, as I was fighting tears at the end of the review. Shooting that video was one of my strongest memory of the challenge. ||

Sharon || The only one that I follow religiously is Barbie van Horn from Finding Chocolate. She knows exactly what she talks about. She is what I define a true connoisseur. If she told me the tasting notes of a chocolate bar, I would believe her blindly without even trying the product. I also enjoy the blogs managed by chocolate companies on their websites. ||

Estelle || Three blogs I started following are: Eating the Chocolate Alphabet, Time to Eat Chocolate, and Chocolate Disorder. Check them out! ||

Who is The Chocolate Journalist // 37 Chocolates without chocolate?

Sharon || Someone that watches too many YouTube videos on marketing and business, likes to travel alone and thinks that only good food is worth spending a lot of money on. ||